Our guide to caravan heating systems

If you’re a first-time caravan buyer or considering your first upgrade, you may not know that there are different options when it comes to caravan heating. Find out more about both so you can decide if you’re happy with either or if you’d rather go for a model with one or the other.

Most caravans have either blown air heating or radiators. Blown air systems are either Truma or Whale. The radiator system is Alde. Truma usually comes in more entry-level caravans, whilst the higher end models are more likely to have Alde. But that doesn’t necessarily mean Alde is better - it’s a matter of preference and what will best suit you.

How do blown air systems work? 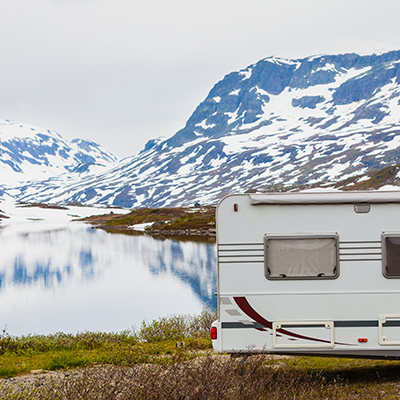 The latest Truma Combi system provides both water and air heating. It can be powered by gas or electricity or a combination of both. It heats the space by generating warm air, which is pumped through circular vent holes close to floor level. The Truma Combi can heat its 10-litre water tank from 15 degrees Celsius to 60 degrees Celsius in less than 30 minutes. It can also be used separately to the air heating system.

Whilst it is sensible to use your heater in 230V electric mode most of the time to limit gas usage, the option is there to use gas as well in colder weather to heat up your caravan much faster.

Whale make both air and water heaters, which can be powered by gas and mains electricity separately or a combination of both for rapid warm-up. Like the Truma system, it generates warm air which is ducted around the caravan. Unlike the Truma, Whale’s system is tucked away under the caravan floor in a weatherproof shell, freeing up precious under seat/locker space inside the caravan. The water tank is hidden away too.

How does the Alde radiator system work?

The Alde system is much like your central heating at home, heating the caravan using hot liquid through pipes to radiators, which is why it is sometimes referred to as the ‘wet’ system. It also heats the water for showers, sinks and heated towel rails.

Radiators are located behind furniture, so warm air rises from behind backrests. The system draws cool air from floor level, heating it so it rises to ceiling height. As it cools, the air moves downwards and is then drawn into the system and heated again, creating circulation.

The result is an even warmth, which is efficient, especially in low temperatures. This makes Alde the preferred choice for many caravanners who opt to tour year-round rather than just using their caravans during the traditional ‘caravanning season’ of March to October.

The Alde system is a combi boiler, simultaneously heating the central heating fluid and hot water. The current model, the 3020, can produce a maximum output of 8.7kW of heat when used on gas and electricity together. With gas only, it delivers 5.5kW and on electricity 3.2kW. Its hot water system will heat the 8.4-litre tank to 50 degrees Celsius in 30 minutes, using the ‘boost’ setting.

+ Very efficient on modern vehicles, so it will warm your caravan very quickly.
+ Works off both gas and electric, which makes heated off-grid caravanning possible.
+ You can set up to three timers a day for your convenience.
+ It has a boost feature that supplies additional hot water quickly if you run out.
+ Ability to reduce the temperature at night quickly if desired.

- Air blown systems do make a little noise, which may cause annoyance at night.
- It’s more expensive to run than a radiator system.
- You can sometimes experience cold patches, where the warm air hasn’t reached - the washroom can be particularly affected by this.

Pros and cons of radiator systems

+ The system is silent - no noise disturbance at all.
+ It’s very cost-effective and cheap to run.
+ Timers can be set for your convenience - these can even be controlled via a phone app on some models!
+ Even warmth with no hot or cold patches, providing a constant, comfortable temperature.
+ Very efficient, especially in low temperatures, which makes it a popular choice for year-round caravanners.

- This system can be trickier to use as you need to make sure you get the fluid levels right in order for it to work well.
- It takes longer to reduce the temperature.
- Could be considered higher maintenance than a blown air system as there is the risk of leaks and the system will need to be topped up with antifreeze from time to time.

At a glance - which ranges have which system?

If you’d like to discuss the heating systems in more detail, pop in and see us, book an appointment (if you’d rather have a dedicated time slot) or give us a call on 01962 714844. Check out our Bailey and Swift caravan ranges online and get a shortlist going!

We’re hosting a Model Preview Weekend on 29-31 October to showcase some of the new models from the 2022 Swift and Bailey caravan ranges which are available to order now!